Home/History/He Loves Me, He Loves Me Not…
Previous Next

Dating back to the era of ancient Greeks and Romans, the bride and groom were often adorned with garland around their necks as a good luck charm.

The garland was a symbol of the couple’s new life together, representing hope and the gift of future fertility. Women also carried bouquets, but Instead of flowers, a spray of fresh herbs and spices was carried and thought to repel evil spirits and increase sexual desire!

It wasn’t until Queen Victoria married Prince Albert, that the trend for carrying flowers began.

During the Victorian Era, flowers bloomed into having more to offer than just their look and smell. They came with actual meaning.  Sometimes not so nice meanings. The fragrance, color, and whether or not the bud was open—all determined the point that the sender was trying to get across to the recipient. Unlike today, a woman might be in tears after receiving a bouquet of flowers from her love. This is where the popular Daisy Oracle “he loves me, he loves me not….” comes from.  Using flowers to communicate emotions and feelings was eventually called Floriography, which translates to “The Language of Flowers.” As Floriography grew in popularity, the use for them in weddings became apparent. 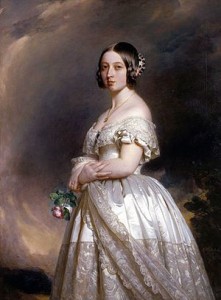 Today, flowers are seen as a mostly romantic gesture. Available in thousands of colors– they are the biggest form of decoration at the wedding ceremony! Lovely to look at, inspiring, and wonderful to smell….

Although Floriography isn’t necessarily used today it can be useful if you want to choose flowers that represent a special meaning.

Want to use Floriography in your own wedding? Check out this handy table!